Charlottesville Swing Dance Society (CSDS) is a West Coast Swing dance club serving Charlottesville and the surrounding area.  Look here for info on the next dance or checkout the newsletter below.

Attendees of all CSDS events are expected to be familiar with and abide by our Code of Conduct. 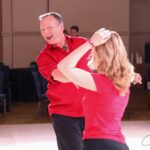 We look forward to seeing everyone at our February dance with instructor/DJ Keith Stremmel. Keith is a full-time dance professional who has been dancing since 1999 and teaching since 2006. Keith does it all: West Coast Swing, Hustle, Nightclub 2-Step, Country 2-Step, etc. and we’re excited to have him back at CSDS!

more info
Keith is a full-time dance professional based in Lancaster, PA. He started dancing in the country scene back in 1999 and initially concentrated on Country 2-Step, East Coast Swing, Cha-cha and line dancing. Keith didn’t think much of West Coast Swing until about two years later. While attending a major dance event, he was inspired with the higher levels of West Coast Swing. With that event, and slowly more events to come, it fueled his interest of wanting more dance, and he took a greater interest in West Coast Swing. Additionally, he found himself trying, liking, and learning, Argentine Tango, Rumba, Salsa, 3-count Hustle and Nightclub 2-Step. With his skills and passion for dance growing over the years, Keith also discovered how rewarding it is to help people learn and grow in dance.

In late 2006, Keith started teaching weekly classes and private lessons of West Coast Swing and Hustle, in Red Lion, PA. Later the classes spread to York and Lancaster, PA, Baltimore, MD, and Washington DC. While traveling in New Zealand in 2007, he was invited, and had the honor, to teach a group class in the growing dance community in Hamilton, NZ. In 2007 Jayne Parks and Keith choreographed a Hustle routine and put it on the floor for a public event. The year 2008 became just as exciting and rewarding when Keith partnered with Lara Deni, started choreographing West Coast Swing routines, and then traveled the United States to compete at many major dance events through 2009 with a routine. Keith currently travels to various national dance events and competes in other divisions of West Coast Swing and some Hustle.

Please wear either dance shoes or light-colored soles; whatever you wear must be non-marking!

In the event of an inclement weather forecast, check this event page as we will decide by 1 pm that day if we are having or cancelling the event.